The second senior football semi-final produced a game that could not have been tighter, and could have gone to either team in fairness. The game ebbed and flowed, and was level at half time. Heading into the final minutes the sides were still tied and Donegal kicked three scoreable wides, when Shannon Blues midfielder, Stephen Gilmartin, sent two shots sailing over the bar in the last two minutes of play to send the Blues into their first senior final in 10 years. 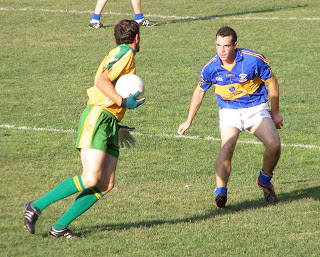 Christy Bell searches for a colleague to play the ball in to.
The Blues got off to a lightening start. David O’Callaghan was making the most of the extra space afforded to corner forwards on the big field with the Blues targeting his corner with early balls. O’Callaghan put two points over the bar, and drew the foul for a third. Donegal saw fit to switch Cahir Healy to quieten the Tralee marksman. O’Callaghan was a little quieter, but still managed another point before half time, and his fourth in the second half – two points is not a bad return from probably the best corner back in Boston this year. Stephen Gilmartin put two frees over the bar and the Blues led by four points before Donegal got off the ground. Once Paddy Kelly opened the northerners account in the ninth minute, Donegal began to click and enjoy a spell on top. Kelly worked hard in the corner and was the prime target up front for Donegal, winning a lot of possession. Fellow Kerry native, Eddie Mangan, playing at wing forward converted twice, one free,to bring Donegal within two points. O’Callaghan and Philip Lydon pointed for the Blues and Christy Bell and Paul Roper for Donegal as there was nothing between the teams on the balance of play at this point. With the first half winding down and the Blues leading by two, Mangan pointed from a free and then from play to make it 0-7 to 0-7 at the break. 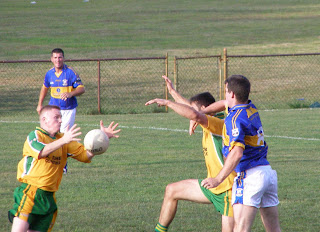 Kevin Curran gets to this break between Donal McNulty and Philip Lydon.
Donegal came out fired up in the second half. From the throw in center back Shay Hannon caught the Blues rearguard off balance and came unopposed down the middle to fire Donegal into the lead. Christy Bell added a point, and substitute Cormac Mullins found himself through on two occasions and blazed wide. Donegal appeared to have the edge in terms of possession. The Blues mustered a point from Alan O’Donoghue, but Kelly restored the 2 point advantage for Donegal with seven minutes of the second half played. Gilmartin put a free over the bar, and Kevin Curran again kept Donegal two ahead with a nice curling effort. After O’Callaghan matched Curran’s score for style with 15 minutes to go the Blues began to push a little harder and win more of the midfield breaks. Lee McQuade did not make the scoresheet but proved to be an important cog in the forward line, while Gilmartin and Lydon began to get the advantage over their opposite numbers in the middle of the park. Ken Kileen was introduced to bring some experience onto the field down the stretch. After the Blues kicked two bad wides Kileen drew the sides level with 10 minutes left. After another bad Blues wide, Gilmartin put the Blues ahead with 8 minutes to go, but Mullins brought the sides level again. With time running out Donegal made a final push and generated some chances that sailed wide – extra time looked a clear possibility. However, Gilmartin found himself with room 30 yards out, took a look and his shot went high and true and the Blues led by a point. On the 30th minute Gilmartin found himself in a similar position and scored an almost identical point to the celebrations of a long hungry Shannon Blues team and their supporters. With Christopher’s in the final a new name will be one the cup next Sunday. Will it be the Blues bridging a 10 year gap or Christopher’s winning their first senior football championship? We’ll find out in a weeks time.

Now that the Donegal & Fr Tom's season in Boston has come to an end for 2009, I wish to complement you Rory on your excellent match reports which I followed on a weekly basis during the summer. For 12+ years I have spent my summers following & supporting my son in his hurling & football pursuits and we missed not having him at home to do the same this year. Your reports were a wonderful lifeline for me & my family and kept us up to date with his matches. He's arriving home to us on Sunday morning having been gone for over 8 months, we can't wait He's playing his first match in Ireland this year for the Portlaoise hurlers on Sunday afternoon. Thank you Rory for keeping us in touch. Well Done Keep it up.

Thanks for your comments, and best of luck to Cahir and Portlaoise.