A week is a long time in football. After dispatching of high-flying Donegal last week with a focused, efficient display, McAnespies fell to a depleted Connemara Gaels. The Gaels performances have been inconsistent this season, but the Connemara men produced the comeback of the season with a passionate and committed second half display. After the first 30 minutes it looked like a handsome McAnespies win would be the inevitable outcome, but the Gaels raised their game in the second half and overcame an 11-point deficit to leave McAnespies scratching their heads wondering how they could so easily push past their opponents in the first half, yet still not win the game. 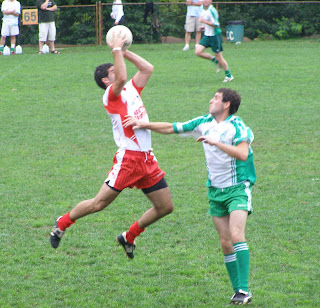 Neil McAdam wins the ball for McAnespies as they ran over their opponents in the first half.
McAnespies were missing Mark McGovern and rearranged the team slightly, but the Gaels found themselves having to call up Pat O’Malley and Michael Kelly from the junior squad. The South Boston side had the ball in the Gaels net twice within the first eight minutes, the first was from an Alan Nestor penalty. Nestor was fouled in the area as he ran through the Gaels defence and took the penalty well. The second came courtesy of Luke Sweetman. The Erins Isle clubman was found unmarked at the far post and his close range shot cannoned into the far corner. The Gaels picked up two bookings as the backs were forced to resort to containment of an illegal nature, such was the manner in which they struggled to hold off the rampant McAnespies forwards.

Gaels corner backs Cormac Arkinson and Colin Flanagan worked hard to try and keep Jamie Kelly and Colm McCrory in check, but McAnespies came out of the half back line strong, and Rory Maguire and Colm Donnelly in the half forward line proved to be valuable link men. McAnespies tallied eight points for the remainder of the half and were seldom troubled at the back. Colin Harkin, John O’Brien, Tom McDonagh, and Michael Magill managed points for the Gaels, while for McAnespies, Jamie Kelly, Colm McCrory, Rory Maguire, Gary Clarke, Sweetman, and Colm Donnelly found the mark. At the half McAnespies were ahead by 11 points, and the outcome seemed to be already decided. 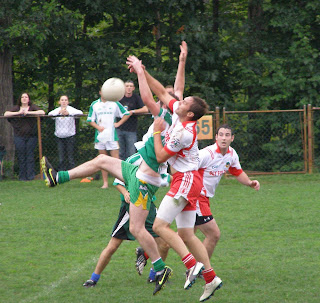 A midfield tussle as the tension mounts in the second half.
Nobody could have forecast what was coming in the second half. Two goals in the fifth and sixth minutes breathed new life and belief into the Gaels. Michel Magill caught the McAnespies defence unawares and planted a 14 yard free into the back of the net five minutes in, and one minute later Colin Harkin ran through the opposing back line to fire home a second. Given the way the first half went,even this appeared to be a blip on the radar. Colin Harkin and Aiden Flanagan lifted things in the middle with some fine fielding as the Gaels won more and more possession. McAnespies on the other hand seemed to be happy to maintain cruise control. Having to remove Colin Moore and Alan Nestor from the fray did not help, and the Gaels to their credit took full advantage. Michael Magill found a new gear as he and Colin Harkin ran at the opposing defence. With 10 minutes to go the difference between the sides was three points, Tom McDonagh, O’Brien (a superb score), and Magill pointed for the Gaels, while McCrory kept some distance between the teams with two points. 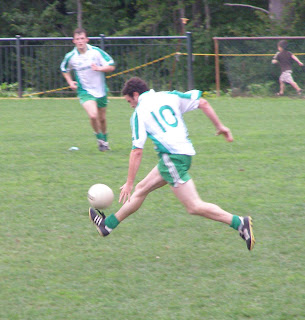 Michael Magill in full flight as the Gaels run at McAnespies in the second period.
After Jamie Kelly restored the lead to four points in McAnespies favour, and Michael Magill reduced it to a goal, the Gaels kicked three straight wides. A brave comeback that fell short seemed to be the story for the record. Colm McCrory seemed to get the insurance point with one minute left, but Michael Magill put a free kick over for the Gaels to make it three between the sides once again. The Gaels then won a free on the edge of the square, and Magill tried to force the ball through the wall of McAnespies defenders. The Antrim man picked up the rebound and fisted the ball across the crowded goalmouth for Colin Harkin to punch home and level the game. Could the Gaels do the unthinkable? None other than Michael Magill put the winning point over the bar three minutes into injury time to the cheers of the Connemara supporters. A fantastic win for the Gaels, and for McAnespies there may be some figuring out to do if the championship is to be retained.
Gaels: P. O’Malley, C. Arkinson, C. Flanagan, C. Conroy, A. Flanagan, K. Owens, C. Harkin (2-1), J. Flaherty (0-1), M. Kelly, M. Magill (1-5), T. McDonagh (0-3), J. Moore, J. O’Brien (0-2). Macs: D. Wright, C. Moore, D. Donegan, K. Hudson, N. McAdam, A. Nestor (1-0), G. Clark (0-1), N. Donaghy, C. Donnelly (0-1), R. Maguire (0-2), L. Sweetman (1-1), C. McCrory (0-7), J. Kelly (0-2).
By Rory O'Donnell
Posted by Rory at 11:36 PM