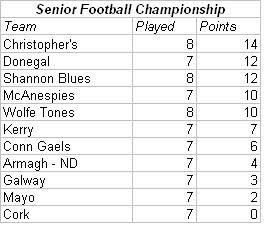 Christopher's beat the Wolfe Tones last Saturday, and came from behind to do it. Now the Tones must sit a wait to see what happens Sunday as the outcome of the Kerry v McAnespies game will determine their fate. The Tones will be hoping that Kerry can overturn McAnespies, which would mean a playoff between the teams for the fourth and final Playoff spot. Kerry really have nothing to play for as they are locked in to the intermediate semi-finals, but the prospect of beating the Boston and North American champions could be enough for them to raise their game heading into the playoffs. Either way, a toss of a coin will have to determine who plays who in the senior semis as it is likely that Donegal and Christopher's will be joint top with 14 points. Donegal just need to beat Cork who are out of it altogether. Most likely McAnespies will join the Shannon Blues to share third and fourth.

On the intermediate front we will probably have the Wolfe Tones, Kerry, the Gaels and Armagh-Notre Dame. Armagh-ND need to beat Mayo to ensure their place in the intermediate playoffs. Galway will be hoping for Mayo to make a face saving effort and then beat the Gaels themselves.
I'd be betting on a Wolfe Tones v Armagh-ND and Gaels v Kerry semi-finals pairing.

Sunday next features Galway and Tom's. A Galway win puts them into a playoff spot. Tom's need to win to force a playoff game with Galway for a semi-final place. Both teams have blown hot and cold, but if Tom's can find the resolve that they showed last Sunday Galway will be in for a difficult hour. Tom's have already beaten Galway, and Galway will need to tighten up their game in all areas in order for them to continue in the championship. Could be a good one next Sunday!
The Roscommon ladies pulled off a win last weekend and will again play the Shamrocks to see who advances to the ladies final where Tir na nOg await the winners.
Posted by Rory at 3:01 PM