The Blues made sure that there would be no comeback for the Connemara Gaels this week with a convincing win. The Blues secured a senior championship playoff place and there is no reason to believe that they cannot go on to even better things this year given their recent performances. The Gaels fell behind early, and unlike a week ago, were unable to launch a miracle comeback as the Blues kept a tight grip on the game and did not let up until the last five or ten minutes when the game was safe and several veterans were then introduced to the fray.

The Blues set the tone early. Stephen Gilmartin was in fine form in midfield and the early traffic was all in one direction. The Blues clocked up six points in the first ten minutes, the Gaels opened their account after 12 had passed. The Blues forwards caused numerous problems for the Gaels. Lee McQuade and Colm McGee on the wings, and corner forwards David O’Callaghan and Alan O’Donoghue worked hard. All four of the aforementioned front men pointed, while Simon Sinnott sallied from the half back line to add the sixth. Colin Harkin and Aiden Flanagan put back to back scores together for the Gaels, but the westerners could not get settle into any kind of sustained form. The Blues had a virtual monopoly on possession and quickly took a hold of affiars again. O’Callaghan, McGee,and Brian Maloney put four over between them, and Cormac Arkinson came from corner back to point the third for the Gaels. At the break the Blues led by seven points. 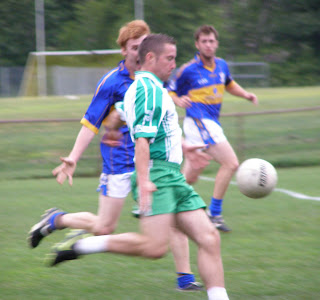 Cormac Arkinson shoots for the Gaels.

The Gaels efforts at replicating last weeks comeback were hampered on two fronts. Some poor shooting resulted in several wasted chances. Also, the sending off of Kevin Owens for an off the ball incident did not help the Gaels cause. Ten minutes into the second period, after the Blues had added two more points, the Gaels won a penalty when Mark Dougan was pulled down in the box. Dougan’s initial shot was saved, but Colin Harkin was first to the rebound to make it a six-point game. The Gaels hopes of pulling off another comeback were quickly extinguished as within five minutes the goal was erased courtesy of three points, two from Gilmartin and one from McQuade. Michael Magill interrupted the Blues onslaught with a point, but once David O’Callaghan netted for the Blues with less than 10 minutes left that was it. John O’Brien scored a consolation goal, and the Gaels are now looking at the intermediate playoffs, while the Blues are looking to knock McAnespies off their perch.