With Galway out of it either way, since Armagh-Notre Dame defeated Mayo the night before, the outcome of this game would just determine the semi-final matches for the intermediate playoffs. Galway had nothing to play for, but put on a commendable display even though the tempo of the game was not exactly of the high octane type. After 30 minutes of play the teams were level at 2-7 each. Mark Dougan and Michael Magill netted for the Gaels, while Donal Redmond and Peter Nolan accounted for Galway’s goals. 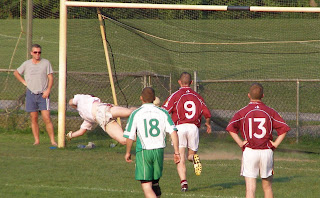 Mark Dougan hit home with a second half penalty.

The Gaels opened up a 7 point lead in the opening stages of the second half. John O’Brien and Dougan each pointed. Dougan then won a penalty which he slotted home himself, and Colin Harkin then added a fourth goal for the Gaels, finishing a move that began with a save from Pat O’Malley. Galway fought their way back however. The tribesmen lifted their game in all areas of the field. An easy win for the Gaels would not be allowed. Kieran Lillis goaled and a minute later was through the middle of the Gaels defence again,only to be denied by a great Pat O’Malley save. O’Malley tipped the ball over for a point. Greg Rogan made it a two point game with a well taken free. Mark Dougan established some room again for the Gaels after palming home a ball played across the face of goal. Galway still kept coming at the Gaels. Three points on the trot from Pauric Howard, Nolan, and Rogan pulled Galway to within 2 points again, with 5 minutes to go. Rogan pointed again with time running out, and Galway had one last chance to equalize that sailed wide of the post.

Tuesday night the Galway hurlers and Fr. Tom's meet again, with the winners to face Wexford in Sunday's semi-final.