Aiden McAnespies 1-10 Christopher’s 3-10
Aiden McAnespies reign at the top of Boston and North American football was brought to an end at the hands of Christopher’s. Christopher’s, a side with three American born players in the starting lineup, found themselves in the unfamiliar position of the senior football semi-final and put on a blistering display of early passing and shooting in the first half. Two crucial goals in the second half from substitute Mark O’Sullivan secured the win as McAnespies were making a brave push to come back from behind down a man. 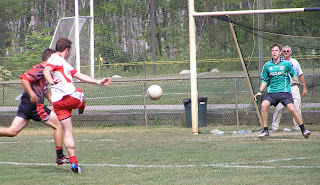 Rory Maguire shoots, and Ryan Graber made the save.
Christopher’s were sitting pretty at the end of the first half thanks to some well taken scores by the forwards, and a back line that covered well for each other. Sean Kelly curled a lovely point over the bar in the first minute, a sign of things to come from Christopher’s. McAnespies settled into the game and Colm McCrory finished a well worked move to point, and Colm Donnelly did likewise soon afterwards. In the early going McAnespies were one step ahead. Once Christopher’s got into the swing of things the forwards put some nice moves together and took some lovely points. Ian Rowland leveled things with a pointed free after Barry O’Driscoll was fouled, and O’Driscoll himself followed with a fine score. Christopher’s threatened the McAnespies goal on a couple of occasions, Sean Kelly’s shot was well saved by David Wright, and shortly afterwards it was Kelly again who was blocked by the diving Fergal McPhillips as he shot low from close range. Kelly was a powerful force and McAnespies had little answer for the strident running of the Crossmolina man. Rowland put two more frees over the bar as Christopher’s enjoyed the advantage in the balance of play. McCrory and Donnelly answered for McAnespies with a point each, but the Tyrone side lost Neil Donaghy to a red card for striking his marker as the kickout was being taken. A goal came from Barry O’Driscoll as he finished off a good move low into the far corner as Christopher’s motored. Hegarty and Rowland put two fantastic points over from play, and Collie Moore and Donnelly pulled a couple of points back for McAnespies. Donnelly and Sean Kelly traded points to leave Christopher’s five points to the good at half time. 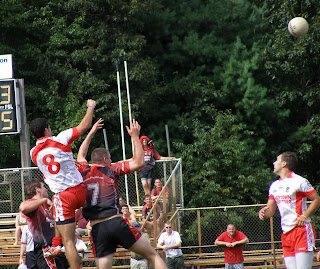 Neil McAdam and Will Kennedy contest a kickout.
McAnespies came out strong in the second half, clearly with the attitude that it was all or nothing. The northerners tallied the first four points. Neil McAdam put two dead balls over the bar and was followed by a Collie Moore point. Moore stole forward from his corner back berth where he was putting in a Trojan effort in trying to keep Barry O’Driscoll shackled. Colm McCrory put a fourth unanswered point over the bar to bring McAnespies within a point with 17 minutes of the half expired. Christopher’s looked like they had lost their way, and that the introduction of Mark O’Sullivan at corner forward at the break had disrupted the forward line. O’Sullivan however proved invaluable when he finally got involved in the play. McAnespies failed to properly clear a ball as tired legs eventually took their toll, and O’Driscoll found an unmarked O’Sullivan standing on the edge of the square. O’ Sullivan coolly worked the space open and side footed the ball home. Ian Rowland followed with a point from a 45, but McAnespies still had life. Colm Donnelly netted to keep hope alive for the South Boston lads but O’Driscoll and O’Sullivan combined again to score a second goal – O’Sullivan again unmarked in front of goal as the spaces opened up in the McAnespies back line. O’Driscoll pointed to cap a fine overall display from Christopher’s.
Macs: D. Wright, C. Moore (0-2), K. Hudson, A. Nestor, M. McGovern, F. McPhillips, N. Donaghy, N. McAdam (0-2), C. Donnelly (1-3), R. Maguire, J. Kelly, C. McCrory (0-3), D. McCrudden. Christopher’s: R. Graber, N. Ryan, E. Cotter, B. Lonergan, P. Hogan, S. McNally, D. Kenneally, W. Kennedy, I. Rowland (0-5), S. Kelly (0-2), G. Kenneally, B. O’Driscoll (1-2), E. Hegarty (0-1). Sub: M. O’Sullivan (2-0)
By Rory O'Donnell
Posted by Rory at 6:26 PM

i think that neil donaghy was harshly sent off. he did not strike he simply blocked the players run, neil donaghy is not that ype of player and it is the 1st time he has ever been sent off.
thought the overall performance from the ref who was brought in from ireland was very very poor, but well done to christophers a very strong side.

I do agree with the above, not Neil Donaghys play nor what he done had the referee seen it. I do think the ref, was deplorable. But that was to be expected with his statement before the game. Have to commend the christophers well done I think even with Neil playing they would have won. They have a great team spirit this year and a team and bench full of diligent workers as was displayed. Best of luck this weekend.. and to all who represent Boston.

Thanks for the comments. It was a tough loss for McAnespies, but Christopher's played some fantastic football in the first half, and while it would have been closer, I'm not sure if the end result would have been different if Neil Donaghy had not been sent off. I cannot comment on whether it was a harsh decision or not, only that it happened. Looking forward to a good match on Sunday.