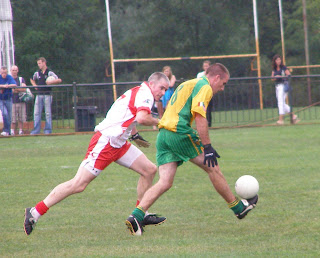 Shane Lynn tries to stop Donegal's Thomas Caldwell.
McAnespies regained the Junior A football championship title in a scrappy affair that could have gone either way. After a tight first half, a goal each from Shane Lynn and Colin Clarke mid-way though the second provided McAnespies with a lead that Donegal could not overturn. Donegal seemed to be playing the slightly better football, but once McAnespies took the lead, the northerners found their groove and made sure there would be no comeback for Donegal.

Donegal held a slight advantage at the end of a scrappy first half. The previous day’s rain had made the surface a little greasy, but the field looked in good condition considering. The sides traded scores to open the half, and the game began to take shape. Defences were on top as efforts from both sides at creating something fell short, and when shooting opportunities presented themselves, the shot was usually wayward. Jonathan Byrne and David Bell each pointed well to put Donegal two points to the good. McAnespies got back into the game and added to their tally through Kieran Leonard. David Bell canceled out the score , and each player did likewise before the end of the half. Donegal led by two points, 0-5 to 0-3 at the half. 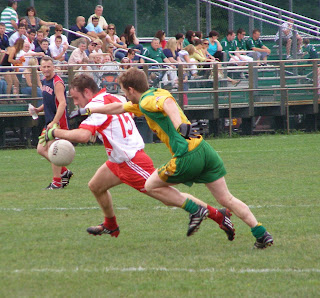 Kieran Leonard bursts through as Paul Boyce moves to intercept.
The second half started as the first did, the sides traded scores. Paul Boyce made the most of a goalmouth scramble to force the ball over the bar, and Leonard answered for McAnespies with a well worked point from the kickout. Both sides continued to give the ball away and were error prone when in possession. McAnespies hit Donegal with a double blow mid way through the half as the northerners finally found their stride. The first goal came from Shane Lynn. Lynn got on the end of rebound off the post and finished from close range. Eugene McKenna added a point and McAnespies began to look like they had found their groove. The second goal was a well worked score, Peadar Nugent and McKenna found each other and then Nugent passed to the incoming Colin Clarke whose finish was perfectly placed into the bottom right hand corner. McAnespies now led by five points. Donegal hit back shortly afterwards with a fine goal of their own. Paul Boyce finished high to the near corner, and with less then 10 minutes to go it was game on again. Paddy McCusker and Thomas Caldwell traded points and heading into the final sequence McAnespies held a dangerous two point lead. Donegal pressed forward in search of the score that would save the game for them, but McAnespies defenders shut the door. Eugene McKenna, who came back after a broken jaw earlier in the year, put a sideline over the bar for the final score of the game, and McAnespies regain the junior football title.
Donegal: C. Murphy, P. McNulty, R. Porter, F. Grenaghan, E. Doonan, C. McGee, J. Byrne (0-1), T. Caldwell (0-1), J. Deery, E. McCarney, P. Boyce (1-1), D. Bell (0-4), C. Rush. Macs: N. Duffy, N. Clancy, C. Traynor, G. Hennessey, P. McCusker (0-1), C. O’Hanlon, S. Lynn (1-0), C. Clarke (1-0), P. Nugent, M. Allen, S. McGettigan, K. Leonard (0-4), E. McCusker. E. McKenna (0-2).
By Rory O'Donnell
Posted by Rory at 2:31 PM