Brighton rival clubs, Armagh-Notre Dame and Galway met in a game with intermediate playoff implications and there was but a hair between the sides as the game could have gone to either side. In spite of playing second fiddle on the balance of play for the first half, the northerners went in at the break with a one point lead and went on to win the game in spite of being a man down for most of the second half and having to defend against a Galway team that threw everything at them in the final ten minutes. 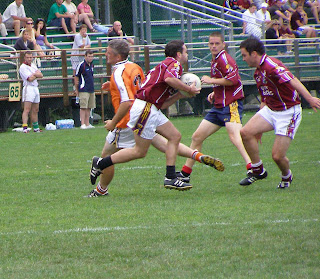 Alan Glynn breaks out of defence.
The first 10 minutes were evenly contested, each side converted twice. Galway suffered a blow, however, as Brian Hanlon’s participation was cut short due to an injury, and the westerners surely missed his scoring prowess in the latter stages of the game as they launched several attacks that fell short at the final hurdle. Neil Jordan opened the scoring for the northerners with free. Hanlon brought the sides level before having to depart the fray. After Greg Rogan and Jordan traded points to make it two each, Ryan O’Dwyer scored a cheeky goal. Running through and with the keeper advancing to meet him, O’Dwyer chipped the ball over the keeper and Galway led by a goal. Rogan made it a four-point Galway lead and the tribe were humming along, while their opponents stuttered. The men in orange picked things up a tad and were soon back on level terms. Darren Gilsenan got fouled running through and Jordan popped the 14 yard free over. Then largely against the run of play the scores were leveled thanks to a Brian Boylan goal. Boylan finished a sweeping move, the best of the game to that point from the northern side, and blasted the ball into the back of the net. Boylan then put a long range free over the bar to put Armagh-Notre Dame a point ahead at the half. Galway must have regretted several missed chances as they outplayed their opponents for most of the half, and led their guard down in the few minutes before the break. 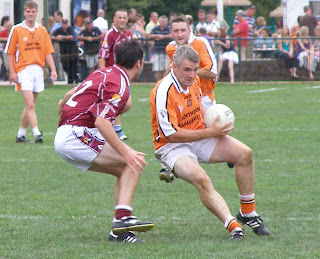 Dominic Magill is closely guarded by Shane Melia.
The second half was keenly contested as Armagh-Notre Dame sensed that the day could be theirs. Both corner backs did well and many’s a Galway attack faltered at the last line of defence. Niall Lennon and Damien Burke also led the charge out of defence on several occasions as if to send a message to their cohorts to keep up the pressure. Dominic McGill extended Armagh’s lead to two points with the opening point of the second half, and Greg Rogan answered in kind for Galway. Neil Jordan restored the lead to two, and the northern side lost Fergal McClelland, who had been introduced as a substitute, to a sending off for an off the ball incident. Leading by two points and a man down, the northerners had it all to do with 20 long minutes remaining to play.

Galway surged forward in search of a decisive goal, and Padraig Howard almost got it, but his shot from an acute angle hit the outside of the post. Jordan then extended the lead to three points with a 21-yard free, and Howard pulled it back to two with a point for Galway. Then Donal Redmond almost put Galway into the lead, but his chip towards the far corner came back off the inside of the post, much to the relief of the orange jerseys and their supporters. Exciting stuff, but that was not all. Adrian Kelly got Galway to within a point, and Darren Gilsenan restored it to two with a fine score. Kieran Lillis came through the middle to bring it back to a single point as Galway came forward in numbers with time running out. Galway had a chance to level matters with almost the final kick of the game, but Greg Rogan’s long range free drifted to the left and wide. Great celebrations for Armagh-Notre Dame as a season that seemed destined for the dumpster is now salvageable. A win against Mayo next week means an intermediate playoff spot.