Galway bounced back following last week’s defeat to Fr. Tom’s. The tribesmen dispatched Cork with a minimum of fuss and, it must be noted, in a much better tempered game than the last time these sides met. The tribesmen and were one step ahead of their opposite numbers in all facets of the game. The sharpshooting James Moylan clocked up the scores in the points column for Galway, while Peter Buckredge at center back and Sean Kelly in the middle of the field kept the prevalent flow of the game in the direction of the Cork goal. The Galway forwards capitalized and after the first 30 led by 12 points and never looked like letting up. Veteran, John Byrne netted a hat trick to round off a markedly improved Galway performance. 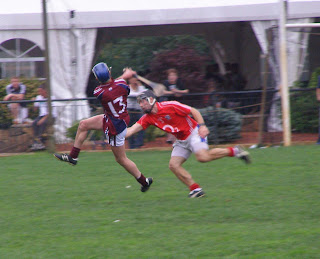 John Moylan points for Galway as Ronan Good tried to block.
Cork opened the scoring through Mike Allen, who pointed a free. Galway then went on a 2-12 to 0-2 tear. Moylan proved to be the main marksman for the tribe. Dubliner, Buckredge, anchored the half back line well, while midfielders Kelly and Greg Lyons held the edge over their opposite numbers in red. Galway’s goals both came from the stick of John Byrne. Byrne maintained his composure on both occasions to find the back of the net from close range. Well out of the game, Cork got some hope back right at the end of the half as Brian O’Loughlin netted, but a few more goals would be required in the second half if the rebels were to stage a comeback.

There would be no comeback as Galway kept up the tempo and the pressure on Cork’s back line. Diarmaid Lynch and Declan O’Dwyer complimented Moylan’s shooting with some well taken scores of their own. Cork sputtered and never raised their game to the level of their opponents. O’Loughlin and Allen managed a couple of points, but at the end of the game Byrne netted his third goal and Galway are back on track for the playoffs in a couple of week’s time.