Tipperary finally overturned Wexford’s dominance of the Boston hurling scene over the last three years with a fine overall display of hurling in a game that held a controversial ending. With Tipperary ahead by two points and no time left on the clock, Wexford dropped a 65 into the square and in the schmozzle that ensued, it seemed at first as if Wexford had scored the winning goal. After consulting with the umpires, the referee restarted play with a throw-in on the 21 yard line and seconds later blew the final whistle to the delight of the Tipperary players and supporters. 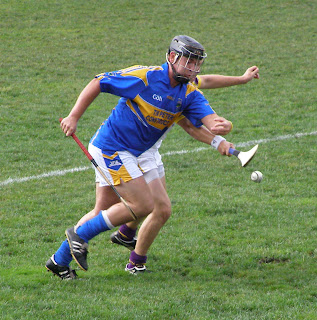 Tipp's Eoin Ryan fights off the challenge of Sean Herlihey.
Tipperary were slightly ahead at the end of the first half thanks to some well taken scores. After Wexford had the better of the early exchanges, Stephen White got started with three points from frees, to one score from James McCarthy for Tipp. Tipp settled into the game and proceeded to pick off the scores. Tipp were in the ascendancy for most of the remainder of the half as Wexford found it hard to release themselves from the shackles of their opposite numbers. Tipp’s back line did a great job marshalling the Wexford threat, and previously unheralded forwards stepped up and produced. Conor Kavanagh sprang to life at wing forward and accounted for two great scores for Tipp. James McCarthy and Paul McGrath also accounted for five points between them. Ger Griffey was solid between the posts for Wexford as he found himself under plenty of pressure balls dropping under the crossbar, and Griffey made some great stops throughout the game to keep his side fromfalling too far out of touch. Stephen White accounted for Wexford’s only point from play in the first half, and Tony Murphy two from frees. Tipp led by two points at the break, eight points to six. 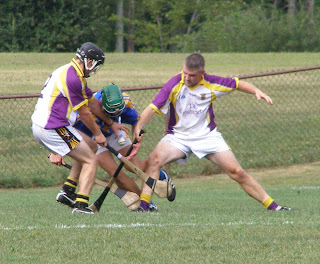 Owen O'Shea and Dominic McGill make sure James McCarthy given no quarter.
Tipp stretched their lead early in the second half with two James McCarthy points and a third from Conor Kavanagh. Wexford saw fit to throw caution to the wind and introduced the injured Ryan O’Dwyer into the fray. O’Dwyer made a difference, even in his less then one hundred percent state of being. O’ Dwyer set up White for Wexford’s first point of the second half, and Sean Herlihey added another, but Tipp quickly canceled out the scores with two points from McCarthy. Wexford’s corner backs’ Owen O’Shea and Kieran O’Rourke did well in helping keep Tipp for netting what would be a decisive goal. With 10 minutes to go Wexford got what they needed from substitute Dylan Kehoe. Tony Murphy found some rare space inside the Tipp 14 yard line, and room to shoot, and James Howard saved well but Kehoe was alert to the rebound and the goal brought Wexford back to within 2 points and plenty of time left. Kehoe followed up with a point and almost leveled the scores but the shot flew sailed just wide.

James McCarthy gave Tipp a cushion with a point in the 28th minute, but Wexford pressed for the winning goal as time was almost up. Jim Howard again saved well from White, and Wexford won a 65. Another 65 followed as Howard made a second good save but Tipp could not clear the ball decisively. The third 65 dropped into a crowd of players and Wexford began to celebrate a goal. After consultation with the umpires, the referee restarted play on the 21 and within seconds sounded the final whistle. A curious end to the game, but few will argue that over the 60 minutes Tipp were deserving winners.