Roscommon put together a fine display of football in the second half to knock the Shamrocks out of the Ladies senior football championship. Roscommon have earned the reward of facing a Tir na nOg team that have looked strong all summer, but will go into the game not having played in several weeks. The Shamrocks were unable to get motoring in the forward line, while Roscommon had Fiona Rochford to thank for putting them in the drivers seat in the first half, and in the second the rest of the forwards stepped up to make a contribution. 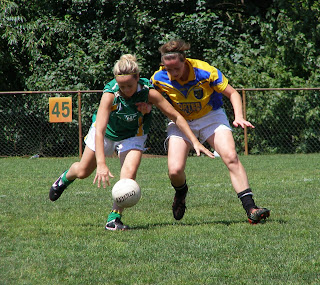 Roscommon's Aoife Waters and Ciara Murphy contest posession.
Playing at center forward, Fiona Rochford proved to be invaluable for Roscommon, netting two goals in the first half. The first came in the opening sequence of play, Rochford beat the keeper from close range as Roscommon opened up the Shamrocks defence. The Shamrocks answered with three points as they settled into the game. Shauna O’Connor put the opening point over the bar, and Emma Harris pointed twice from frees. Roscommon dominated the latter stages of the half and outscored their opponents by a goal and two points. Rochford again was the key to Roscommon’s success. After Maeve Toner put Roscommon a point to the good, Rochford goaled a second time. Emma Harris pulled a point back for the Shamrocks, but two points from Rochford before half time put Roscommon into a 2-3 to 0-4 lead. Rochford could have had a hat trick as on two occasions she came close to netting a third. Nicole Hayward tipped one shot onto the crossbar and the second whistled past the outside of the post. 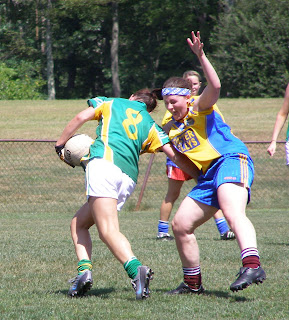 Maeve Toner tries to put a stop to Ann Marie McDonnell.
In the opening stages of the second half each side vied for the advantage. The backs were in the ascendancy as the ball traveled up and down the field, but did not make it between the posts at either end for 21 minutes. Fifteen year old Aisling Kerr and Aoife Waters did well in the Roscommon half back line while Cara McCollough held the line well for the Shamrocks. It was Roscommon who got it together for the final 10 minutes. Maeve Toner pointed in the 21st minute for Roscommon, and the score of the game came 4 minutes later. Aoife McLoughlin won the ball in the corner back position for Roscommon and after seven or eight handpasses, corner forward, Aisling Regan, fired the ball over the bar. Roscommon now led by seven points. Barbara Hannon, Regan and Toner each pointed before all was said and done. Nicole Hayward saved a penalty in the dying minutes, but by that stage the result was not in doubt. Roscommon, whose participation at the beginning of the year was in doubt, now find themselves in another final, and a formidable foe awaits in Tir na nOg.